Southampton allowed Guido Carrillo to spend last season on loan at Leganes and the the Spanish club have been trying to sign him once again this summer.

On August 14th, AS explained the forward is a ‘goal’ for Leganes, and later that day, reports in Spain suggested the Saints’ demands seemed exorbitant.

Spanish newspaper Marca brings the latest update and their report is titled ‘Leganes near to securing Carrillo’.

The report claims Argentine is an ‘express request’ of the Leganes manager. Negotiations between the two clubs are ongoing and only a few fringes are missing to finalise the deal.

Southampton want close to €10m for the forward, and given Leganes will not be able to meet their demands, the option of a loan is most favoured.

This situation is getting to the stage that the Saints need to realise they could lose the chance of a deal for Carrillo if they push too hard. 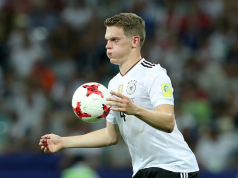 Liverpool have ‘flinched’ at asking price – Player could now move...

Chelsea have strategy to sign player – Only ‘immoral offer’ would...