Pierre Emile Højbjerg is back in Danish contention after a fall out with national manager Åge Hareide.

The Southampton player was deemed to have an attitude issue whilst away with Denmark, and Hareide spoke about it publicly, perhaps going a little over the top in his criticism.

That’s all forgotten now and Højbjerg is working hard to convince his manager to take him to the World Cup. Denmark have called up a preliminary squad, and Højbjerg doesn’t want to be one of the unfortunate ones cut from the selection.

Speaking to Danish newspaper Ekstra Bladet, the midfielder has explained how he’s grown on and off the pitch over the past year or so. Becoming a father has provided a sense of ‘perspective’ says Højbjerg, and he’s saying all the right things for Hareide.

On Southampton, the 22 year old told Ekstra Bladet that the club’s previous manager made a point of praising him for his progression: “Just before Pellegrino was fired in 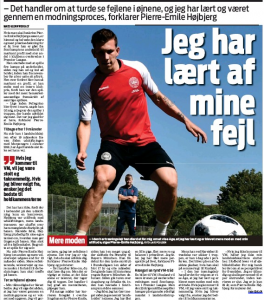 March, he told me that I was the player in the squad that had developed the most. I was pleased to hear that.”

It’s easy to forget how young Højbjerg still is and there’s always likely to be issues with a talent developing. Now firmly on the right track, it’ll be hoped there can be further progress made this summer… in Russia.