Wesley Hoedt was never a big fan of Ralph Hasenhüttl as the latter’s arrival at Southampton in December 2018 restricted the defender’s opportunities at St Mary’s.

After a loan spell at Celta Vigo in the second half of the last season, the Saints allowed the 25-year-old to go out on another loan spell, and in the summer Antwerp signed him on a temporary deal.

The Netherlands international has been highly critical of Hasenhüttl. Speaking to Het Laatste Nieuws in October, the centre-back explained he was ‘unjustly treated’ by the Premier League club’s manager.

Het Nieuwsblad have now spoken to Hoedt and during the course of the interview, he suggested Hasenhüttl was lucky to retain his job at Southampton after they suffered a humiliating 9-0 defeat against Leicester City in October.

He made these remarks while explaining what went wrong for him at the English club.

“Well, a lot of things happened there. That trainer sent me away. I went to Celta Vigo for six months. When I returned, I was so fit that I was at the top of all the lists in the tests,” Hoedt said.

“He came to tell me that he was impressed and that I deserved a second chance. But then I responded: What do you mean, second chance? I have never had a first chance with you. I never played under him for a minute.

“Now, I have shown myself in preparation for eight weeks – very well trained and played – but in the end it was again: ‘We don’t need you, you can go’.

“Anyway, I am still under contract, so I am not going to start a mud fight. The Southampton chapter is as good as closed to me. That trainer is still there. Even after they were knocked 9-0 by Leicester, he was allowed to stay, so yes…”

When Antwerp took the player on loan, they inserted an option to make his transfer permanent for €8m. The Belgian newspaper asked Hoedt if he will continue at Antwerp beyond this season.

He said, “I do not know. Antwerp did try hard to get me. I am very grateful for that and I try to pay it back in the field. But we’ll see in about four months. It is now too early to make statements about this. Perform first.

“I am only here for a year, but that is definitely a goal: to leave Antwerp with a European ticket.” 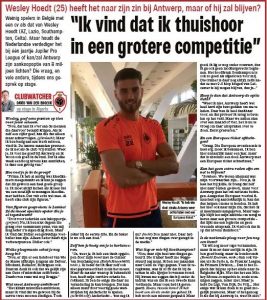 “We all know what my conditions are … Well, I read it with you, I don’t bring it out (grins), but for Antwerp it’s about serious amounts. Since European football is very attractive financially, it can therefore help to keep me. I am also having a good time here, as I have stated on several occasions.

“But at the same time, it’s my ambition to return to a better league. That seems logical and not a strange statement. I also think I belong at that level.”

Probably not at Southampton, though.