Unwanted by Ralph Hasenhüttl at Southampton, Wesley Hoedt knew he needed to find himself a new club in the summer.

The whole transfer window ticked by without a move materialising until the very last day, when Royal Antwerp came knocking on September 2nd to bring him to the Jupiler Pro League.

The Dutchman immediately became a regular for the Belgian side, starting 100% of their league games so far, but, despite the constant first-team football, the player isn’t entirely happy with how things are going.

Antwerp lost to league leaders Club Brugge 1-0 on Sunday via a controversial goal, as Hans Vanaken chip shot appeared to have been cleared off the line by Ritchie de Laet, but the goal was given despite the referee originally giving a corner.

The problem is that the Jupiler Pro League don’t have goal line technology, so there was no way of checking whether the ball did fully cross the threshold, meaning it was up to the officials to make a decision.

The linesman eventually convinced the referee it was a goal, which Hoedt didn’t take well.

Relayed by HLN, he said after the game: “Some four miles away, someone was waving a flag. Well… I saw the images, this was definitely a clear goal? I think it’s really, really ridiculous. If that goal doesn’t count, it’s still 0-0, because we were really good at the back.

“The ref, who stood 10 metres away, gives a corner. A man with a flag stands on the other side and gives a goal. Sorry, that’s not okay. Everyone runs around and p***es on VAR, but if you don’t even have goal line technology, what are you doing? 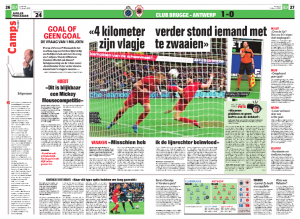 “It can be the difference for finishing the season in second, third or fourth: the difference is immense, also in terms of revenues. In the Champions League, you have a very different income than in the Europa League, and they’re going to cut back on goal line technology? That’s not okay with me.

“Apparently, this is a Mickey Mouse competition. Otherwise, you would have goal line technology. And then there’s the referee’s reaction: ‘The clubs won’t pay for it’. I’m floored. What the hell are we doing? We’re not playing amateur football?”.

Some strong words from the Southampton loanee there, but with Antwerp currently sitting third in the league just three points behind KAA Gent, that gap could have been cut down to two if they’d walked away with a draw instead of a loss.

And with Standard Liège and Charleroi breathing down their neck, you can understand his frustration.