That’s the case of Southampton this weekend, who sent scouts to Lisbon as they watched Belenenses facing Chaves, according to A Bola.

Although the Saints haven’t really been linked to players from either of these clubs, this is not the first time they’ve watched Chaves this season. The scouts were present at the club’s away matches at Benfica and Vitória Guimarães as well.

This time, the officials ended up watching a pretty exciting game. Chaves opened the scoring, but Belenenses managed a great comeback and scored a winner in stoppage time.

The man of the match was Belenenses’ Maurides, who created constant danger and was responsible for scoring the equaliser in the second half. 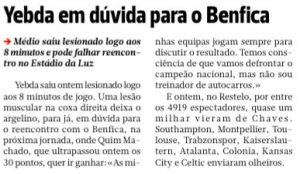 Belenenses’ Florent, Tiago Caieiro and Miguel Rosa all had a good performance as well, as Chaves’ Batatinha was the only one who could be highlighted at the away side.

As the Saints officials have watched a considerable number of matches in Portugal this season, it would be no surprise to see them moving for a local player in the summer.