Alfonso Pedraza spent the second half of last season on loan with Leeds United, playing as a winger. Managing to show some flashes of his talent to the Elland Road faithful, the youngster couldn’t find the right consistency to be a big enough threat for Leeds.

With the Championship club committed to signing Pedraza in the event of promotion, failure to make the play-offs signalled the end of the Spaniard’s time at Leeds United, and he sounded quite happy about that.

At the end of his Leeds loan, Pedraza told the Spanish media: “After Christmas came the option of going to Leeds. To play in the Championship was a good choice to keep growing. We decided to go and although it wasn’t one of my best experiences, I learned a lot and I improved both as a player and person.

“In all, (at Lugo) I got enough goals and gave a lot of assists. I had a lot of confidence and then, at Leeds, everything went very quickly. I arrived in February, didn’t have time to adapt, the league was already in play and there were many matches. It took more, but it was an experience that helped me to grow.”

The 21 year old has recently been linked with Newcastle United and Southampton by Eduardo Fernandez-Abascal of the IB Times. Whilst the links portrayed Pedraza as a winger, it’s not how he’s been playing at Alaves.

Still owned by Villarreal, this time Pedraza took a loan in Spain, after his Leeds ‘experience’, and was quickly converted to be a left back. Taking the role left at Alaves by Real Madrid-bound Theo Hernandez, Pedraza hasn’t looked back.

Therefore it would be no surprise if Southampton and Newcastle interest is genuine, but surely in the player as a fullback. 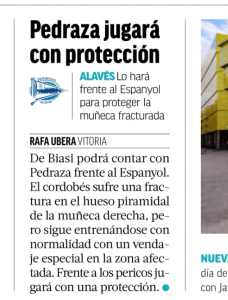 Spanish newspaper Marca report Pedraza has picked up a fracture, just as his star is rising with claims of Premier League interest, but it’s not such a bad situation.

Breaking the ‘pyramidal bone of the right wrist’, Pedraza will have to wear a light cast, and Marca say it’s not going to keep him off the pitch, and therefore he remains in the shop window.

No move is likely before the end of the season, and given he wasn’t thrilled with his Leeds experience, Pedraza may take some convincing to return to England. Southampton and/or Newcastle would have to deal with Villarreal, who have the player on a contract until June 2021.

Given Pedraza’s comments about his Elland Road stay, recent suggestions the player could return to Leeds are likely wide of the mark.