Spending 24 years at Monaco as a player, staff member and eventually manager, if there’s anyone who knows the principality club well, it’s Southampton manager Claude Puel.

The 55-year-old was interviewed by L’Equipe ahead of Manchester City’s return leg in the Champions League against his former club, with the Ligue 1 side needing to win by two goals if they want to knock out Pep Guardiola and co. from the competition.

One of a select group managing to neutralise (to a certain extent) the talented squad at the Spaniard’s disposal, Southampton drew 1-1 with Manchester City at St Mary’s back in October, and Puel explained to the French newspaper how they went about it. 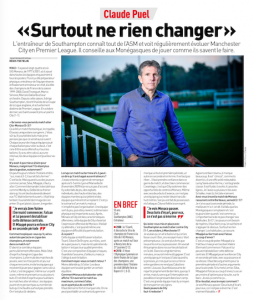 He said: “I wanted us to have the ball and make them run. Well, we tried, but it was presumptuous; they’re stronger than us and they had the ball. We wanted to get the ball out cleanly, and we were. In the last 20 minutes, we even should have won.

“They get uncomfortable when you press them, and I don’t think the goalkeeping competition is helping Caballero remain composed. There too, Guardiola always wants to get the ball out from the back, regardless of what happens, but you feel an interception is possible by pressing them high. They’re a great team, but there’s a way of getting through them”.

Seeing his old side put three past City at the Etihad, the Southampton manager knows what Monaco are capable of, and backs them to go through, as ‘winning by two goals isn’t that much of an ask for them’.

However, in order to do this, he warns Leonardo Jardim to not sit back, but to play the expansive football they have produced since the start of the season.

He said: “You need to start strong and score quickly. You can’t just rely on scoring one in the first half, a second in the second and shut up shop. You need to pick up confidence in this type of game, and therefore start well.

“The advantage is that City will give Monaco a chance to counter. Even with a two goal lead, they aren’t a team who are going to sit back. Their game is possession and attack. City are loyal to their philosophy.”

Of course, neutrals will be hoping for a repeat of the first leg, with defence going out of the window and a flurry of goals, and with Monaco at home, the tide could turn very quickly if Manchester City’s defence repeat some of their Etihad mistakes.

They have been warned, and there is no doubt who Claude Puel will be cheering for on Wednesday evening, watching closely to see if they’ve followed his advice.

Club not rocked by Manchester United interest in player – Red...