Southampton are interested in Spezia’s David Okereke this summer, according to Het Laatste Nieuws.

The Saints are undergoing something of a rebuild under Ralph Hasenhuttl after the Austrian managed to keep them up last season.

Adding to their forward line appears to be of particular importance, with them already signing Danny Ings on a permanent deal and securing Che Adams from Birmingham City.

The club also seem determined to go back to their previous strategy of developing young talent, and it’s something Ralph Hasenhuttl likes to do as well.

That desire appears to have led them to Serie B and Spezia’s David Okekere. Het Laatste Nieuws report they are keen on the 21-year-old this summer but his lack of a work permit may hold up any potential move.

As the youngster is not a full Nigeria international and hasn’t played in a top league as yet, he is unlikely to get a work permit to play in the Premier League. Indeed, the situation is very similar to the issue that Everton have with Henry Onyekuru.

That’s seen as an advantage for Club Brugge, who are also keen on his signature this summer. In fact, the newspaper reports that they are in ‘advanced negotiations’ and an offer of €8m plus bonuses is already on the table.

That makes it sound like Southampton will have to be quick if they are genuinely interested in the young forward.

For his part, he’s said to be a ‘man with a plan’ and would prefer a big move, meaning Southampton would surely be more enticing than Brugge in that regard. 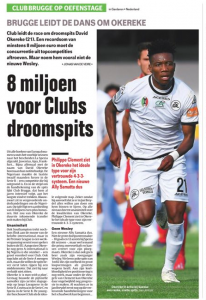 Perhaps the Saints could approach this like Everton did with Onyekuru and sign him to then loan him out to ensure he gets a work permit in future. That would mean they get their man and Okereke gets the move he’s after.

Perhaps they could even loan him to Brugge and then there are no losers in this potential deal.