The Saints’ chase for the 22-year-old is taken pretty seriously by the local media, although the Premier League side are yet to make a bid for him.

Jornal de Notícias writes that Sporting are making no discounts for Jovane Cabral this summer, and demand €20m for his sale.

They say West Ham and Southampton have been interested, with the Saints’ chase being more recent, but none of the English sides have made an offer so far.

It’s said the player won’t force his way out, but is willing to fulfil his dream of playing in the Premier League. 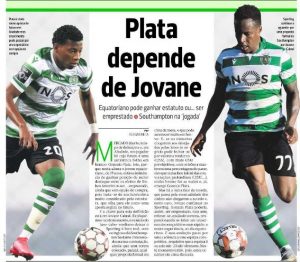 Newspaper A Bola comes up with similar claims, but they say Jovane should actually be a little more expensive.

It’s claimed Sporting want €25m plus €5m in bonuses. That’s because they’ve already made a discount, since the initial demands were of €35m.

Southampton’s chase is highlighted by A Bola as well, with the outlet claiming the Saints are ‘very interested’ in the signing. But a formal bid is still to be made.