Angers manager Stéphane Moulin has admitted it was a ‘nice surprise’ to secure Southampton forward Sofiane Boufal on deadline day.

The Saints outcast completed a return to his form club yesterday, with the French club finalising the deal just three hours before the deadline.

The forward has moved on a free transfer, with Southampton electing to get his wages off the books after he struggled to establish himself in manager Ralph Hassenhüttl’s team last season.

The move sees Boufal returning the club he started his career at, with him spending three years at Angers, moving from their youth ranks to the B side and making 51 appearances in all competitions for them before a £2.7m move to Lille in 2015.

He will be looking to revive his career at the club, having endured a difficult few years at Southampton and struggled to impress during a loan spell with Celta Vigo in 2018/19.

Moulin can undoubtedly see a revival incoming, believing Angers will provide him with the ‘family spirit’ he needs. 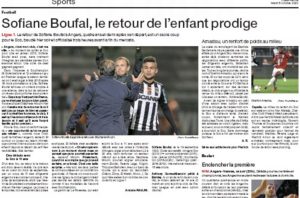 “He wanted to go back to where he knows that it could go well.

“We mentioned his name at one point, but we thought it couldn’t be done. Finally, when we understood that it could be done, we went for it. It’s a nice surprise.”