‘The English hesitate for Naka’ report Record on Christmas Eve.

Shoya Nakajima had first been linked with Leicester City and then Wolves, with claims of impending, or made, offers from both Premier league clubs.

Then a Southampton scouting trip to watch Portimonense saw the Saints pulled into the equation and the idea of interest didn’t seem too unbelievable.

Now, all three are said to be moving on, concerned about Nakajima being away at the Asian Cup until February. He’s been called up to the Japan squad, but that can’t have been a surprise given he was also at the World Cup and it was expected he’d be included again.

Anyway, Record report Southampton have moved on because they ‘need’ reinforcements to be available immediately to help with their ‘difficult’ position in the league table. That 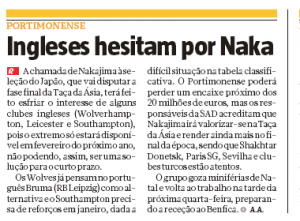 would again make some sense, but the Saints will have known about this in any planning.

Nakajima staying where he is until the summer is an increasing possibility.