Mundo Deportivo have a story talking about Willian to Barcelona for the third day in a row. The 29-year-old is represented by Kia Joorabchian, who also manages Barcelona duo Paulinho and Philippe Coutinho.

The claims state Willian has asked Joorabchian to be in charge of the operation that will see him leave Chelsea and join the La Liga winners. The player’s agent was in Barcelona last week and has travelled to London, where he has been negotiating with the leaders of Chelsea.

Mundo Deportivo point out that whilst Joorabchian lives in London, he’s very much there on business right now.

Barcelona signed Paulinho from Guangzhou Evergrande for €40m last summer. Since the Catalan club were unwilling to meet the asking price, the player paid a part of the transfer fee to join his current employers.

Valverde’s side have informed Joorabchian to find a similar arrangement in signing Willian as they are unwilling to meet Chelsea’s €80m asking price. Another option for Barcelona is to include one of their players to reduce Willian’s price tag, and this is where it gets interesting.

Paulinho, Rafinha, Andre Gomes and Yerry Mina are the four players Barcelna are ready to let go in order to bring Willian to the club. Chelsea have been provided with an opportunity to sign one of the four players this summer.

Mina has struggled since joining Barcelona in January and the former Athletic Club Bilbao manager could allow him leave after they complete the signing of Sevilla’s Clement Lenglet. Mina could be sent to Chelsea in order to help his current employers sign Willian in a player plus cash deal. 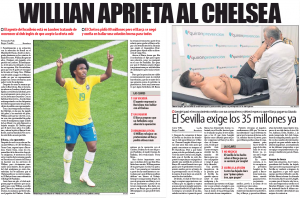 The Colombian was excellent at the World Cup, but rather than making Barcelona think they should keep him, it’s just made them think he’s a bigger bargaining chip.

Will Roman Abramovich and his team be tempted having watched Yerry Mina do so well in Russia? Barcelona certainly hope so, at least according to Mundo Deportivo.