It will still be a while before South Americans can watch their local leagues live on television. So the return of European competitions is a big deal for those who miss football.

Argentine newspaper Olé today brings a big piece on the return of the Premier League in which they’ve interviewed their first two players who featured in England’s top flight.

One of them is former defender Horacio Carbonari, who was signed by Derby County in a £3m deal from Rosario Central back in 1998.

He recalled his adaptation to English football, and remembered the shock of reality when celebrating a goal against Nottingham Forest in his first season.

“At that time, when we arrived, the closest thing to how Liverpool is right now was Manchester United, who won almost everything they played. They didn’t shine but were very effective. With short or big goal difference, they’d wear you out,” Carbonari told Olé.

“I was 24 years old. I had already played 151 games for Central. At that time we dreamed of Italy or Spain, which was what was most seen here. But I ended up being part of the most expensive transfer, up to that point, in the history of the club: about £3m. The first thing they taught me were the bad words in English and how to order the defence. I was saved by Paulo César Wanchope, who was Costa Rican and spoke. Today if I read, I understand a lot.” 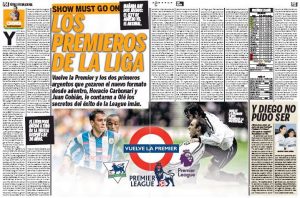 “My first goal was in a derby against Nottingham Forest. And there’s no moat there. I stood in front of the crowd and they came at me. The FA fined me because I incited violence…

“But there are no more hooligans. And 3000, 3500 visitors are allowed. The stadiums have jails and, at the first blow, you don’t go any further. It was a state issue, huh. You get to the pitch and you see them all drinking outside. When there’s trouble, you find out that one is an accountant, another is a lawyer… They are passionate like us. But the fanaticism lasts for them the day of the game and, the next day, to work as usual. You see them sitting down but they sing the same. Do you lose? Are you getting relegated? They know that the next year you can come back. They sup a beer and are someone else. Actually, today the big problem is racism.

“While here we trained three hours like crazy, almost nothing there. The game, tactically, was something else. We defended by area, as in Argentina. Taking out the greats, who played more from below, there was more kicking, more aerial play. Today you see that everyone tries to go out playing. Do you know what it’s like for English football to pass the ball back? Today even your own fans would boo you.

“The one that surprised me the most was the Dutchman Bergkamp, ​​who came from eliminating us in France 98. Also the Nigerian Kanú: he scored in the corners and was very hard, all fibre.

Horacio Carbonari made 88 appearances for Derby County in the Premier League, scoring eight goals, and will certainly be well remembered for his celebration against rivals Nottingham Forest. Following their relegation to the First Division at the end of the 2001/02 season, he only made two appearances in the second tier, and ended up moving back to Rosario Central on a free transfer in January 2003.