Since the news was broken on Friday, the football word is pretty aware that Manchester City are about to sign River Plate star Julian Alvarez, one of the best youngsters in South America.

There had been many rumours about the race for his transfer, as several European giants were said to be interested in the striker in the past couple of months.

Now while some clubs certainly felt gutted for having missed out on the striker, it seems others found an opportunity in Manchester City’s deal. That’s the case of Wolverhampton Wanderers.

Argentine newspaper Olé today features a piece with all details and figures involved in Alvarez’s move to England. Then they claim that Wolves got interested in joining that operation as well. 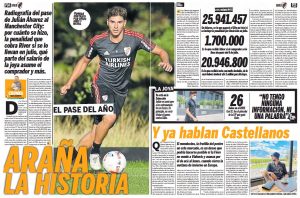 It’s said Wolverhampton side have made an offer to Manchester City to sign Alvarez on a loan deal for one and a half years, where they’d keep him at the Molineux until the summer of 2023.

Pep Guardiola’s side, however, turned down that bid. They’re letting the youngster stay at River Plate until July 2022, and then could extend it for a further six months or take him to England.

Olé makes it clear that Manchester City had no interest in taking the player now, as their plan is indeed to only have him ready to help them in the summer of 2023.

A loan to Wolves until then would definitely help his adaptation to the Premier League, but it sounds like Guardiola’s staff didn’t want that abrupt change for now.