Believe it or not, the Paulo Dybala to Manchester United saga is on again. The rumour is brought back by Italian newspaper Tuttosport on Tuesday.

The story actually starts with Christian Eriksen. The outlet says the midfielder is still keen on a transfer, and Manchester United are presented as one of his options.

Then they mention Dybala, recalling the club couldn’t find an agreement with the player’s entourage during the summer window.

They claim ‘sources close to the Red Devils’ say the chase could be ‘reopen’ in January, even if an ‘irresistible offer’ becomes necessary for the transfer. 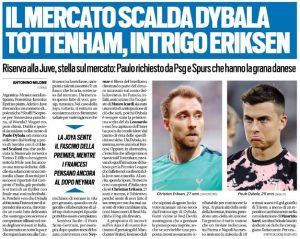 Juventus are said not to be very focused on keeping the Argentine international, especially because he’s only played 14 minutes for the club this season.

So unless Maurizio Sarri suddenly changes his mind and starts using Dybala, they would be happy to listen to offers. And that’s what the clubs interested in the forward should be excited about.

This seems like Tuttosport trying to talk up interest in a player at their local club, but Manchester United did have an interest in the summer so there’s every chance they retain it.