Earlier on Monday, we covered an article in Corriere dello Sport claiming that Inter were interested in Tottenham’s Mauricio Pochettino.

The Argentine’s performance at Spurs over the past four years or so had caught the attention of the Serie A side, who could move on from Luciano Spalletti in the summer despite them sitting third in the league, comfortably in a Champions League spot.

However, they aren’t the only club interested, as France Football seem to suggest Bayern Munich, who haven’t been anywhere near as dominant as usual in the Bundesliga under Niko Kovac, want Pochettino too.

Philippe Auclair is the man behind the article, writing that ‘sources close to Uli Hoeneß’ believe the Bavarian club ‘covet’ the Tottenham manager.

The problem, as always in such situations, is convincing Daniel Levy to part ways with the man behind his club’s consistent form in the Premier League, even if a trophy remains a tough ask in a country where football dominance is becoming tougher to pull off by the year. 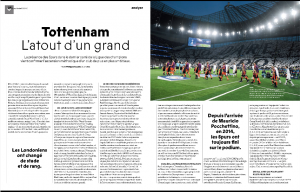 That isn’t quite the case in Germany just yet, as Bayern have been monopolising the Bundesliga since 2013, yet the emergence of RB Leipzig in recent years and Borussia Dortmund’s return to form this season have made things far tougher.

With three games to go, Kovac’s side only hold a two point lead on Lucien Favre’s men, and those at the top seem to believe their situation should be far more comfortable with the squad at their manager’s disposal.

Hence why, with Pochettino constantly getting the best out of his players at Tottenham, it would make sense for them to be interested in the Argentine.