It’s fair to say Noa Lang doesn’t have the best reputation in the Belgian and Dutch media, with there often being more comments about supposed problems with his attitude than there are about the 22-year-old’s performances on the pitch.

Leeds United have been the Premier League club linked most with the player, with links going back many months.

In May of last year, we covered claims of interest from Marcelo Bielsa’s side, and it was stated Leeds would need to spend more than €25m to sign the player from Club Brugge.

In January of this year, it was claimed in Belgium that Lang is ‘keeping Leeds United in the waiting room’, with the suggestion being he wasn’t entirely convinced a move to the club would be right for him.

At the weekend, Lang picked up a late red card whilst playing for Club Brugge against KAA Gent, in a 2-1 defeat. The dismissal was apparently for touching the hand of the referee as he went to get the red card to send someone else off.

The feeling in Belgium is that the red was harsh, and perhaps the player’s reputation played a part.

HLN say in the player’s entourage they believe it’s “something personal”, and that no other player would have been dismissed for the same act.

Lang has been sent off three times in Belgian football, and each time the referee has been Nicolas Laforge. 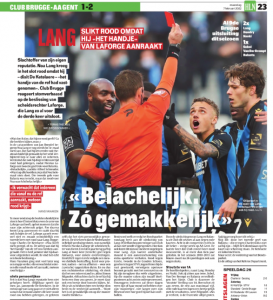 This latest drama just further underlines that Lang will be looking for a new adventure come the summer. So far this season he has eight goals and 12 assists, and two red cards.

Leeds United will surely consider the whole package before rushing ahead with an investment.