Home Europe “If someone were to hit the release clause…” – Liverpool target could...
SHARE

Since the Portuguese media started having stories on Liverpool’s and Manchester United’s interest in Sporting starlet Pedro Gonçalves, the rumour has grown a lot in the British press.

For the past few days, we’ve seen many articles from big outlets claiming the Premier League giants, especially the Anfield Road side, are after the 22-year-old.

Now following the latest stories, newspaper Correio da Manhã brings an update on the situation today where they’ve managed to speak to sources who are close to the affair.

It seems everyone is calm regarding a transfer, and the main reason for that is because he’s no rush to leave the Alavalade.

“The player has every interest in staying at Sporting to be able to grow”, a source told Correio da Manhã. 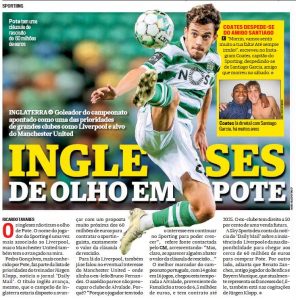 This source, however, said there’s one little possibility which would change the whole scenario.

“But, of course, if someone were to hit the release clause…”, said the source regarding the €60m fee.

Signed on a €6.5m deal from Famalicão last summer, Pote had an impressive start for Sporting, where he already has 14 goals and three assists in 21 appearances in the league.

With the Lions on top of the table and Pote being the competition’s top scorer, he’s the one leading the club to what could be their first league title in many years. So it’s obvious why they don’t even want to talk about a transfer for now.