The former Everton man was sold and the Chile international moved to San Siro on a loan deal with an option to make the transfer permanent.

Lukaku is part of the Belgium squad for the ongoing international break and when speaking to reporters, the striker admitted he made a decision to leave United earlier this year.

“Solskjaer has my eternal respect. He understood me when I said in March that it was time for me to leave England,” Het Belang van Limburg reported Lukaku as saying.

“I have been in the Premier League as an 18-year-old boy and now I am 26. Solskjaer wanted to keep me, but I was ready for something new.”

Ole Gunnar Solskjaer’s side have scored 16 goals in 12 league games this season and the Norwegian has stressed on numerous occasions the Red Devils were right to allow Lukaku and Sánchez to leave Old Trafford.

Lukaku has nine goals in 12 league games for the Nerazzurri, while Sánchez is currently out due to injury.

The Belgian was not a first choice striker for Solskjaer last season, but that is no longer is the case at Inter. The player admitted he’s happy in Italy and said Antonio Conte’s style of football suits his game.

“I have had a good relationship with trainer Antonio Conte for three years and I know exactly what he expects of me,” Lukaku explained. 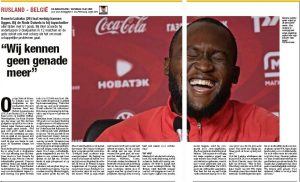 “The first two weeks at Inter I worked very hard with the group and when my teammates got some rest, I trained individually.

“Thanks to my football intelligence, I integrated easily. We play in a system with two strikers and that suits me. Anyway, I already knew my teammates in advance.”