Home Europe Solskjaer will do ‘everything possible’ to convince Paul Pogba to stay at...
SHARE

Manchester United’s Paul Pogba has publicly expressed his desire to look for a new challenge next season.

A few days ago, the midfielder’s agent Mino Raiola stressed ‘everyone within the club’ knows his client’s intention is to leave Old Trafford in the summer transfer window.

Spanish newspaper AS now claims Real Madrid and Juventus have the financial muscle and interest from their managers to secure the 26-year-old’s services.

However, it remains to be seen how long the Red Devils will stick to their tough stance. They are unwilling to negotiate, have not put a price nor opened the door for the World Cup winners transfer.

This goes against what Marca reported on Monday.

AS explains Ole Gunnar Solskjaer ‘will do everything possible’ to change the Frenchman’s mind and convince him to stay at United.

Solskjaer and his coaching are clear that the way forward for Pogba is to lead a project at the club. 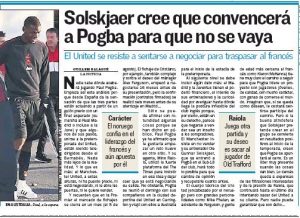 There is a belief that if Manchester United can create a good atmosphere by winning the first few matches, then Pogba is more likely to be part of the project.

AS believe it’s clear the Norwegian trusts Pogba and is still betting on him, but whether or not United will be successful in retaining the midfielder remains to be seen.