On July 22nd, Corriere dello Sport stated that Manchester United are the ‘most interested’ Premier League club in signing Paulo Dybala, ahead of Manchester City and Tottenham Hotspur.

Tuesday’s edition of Tuttosport claims the Red Devils are ‘serious’ about the Argentina international because Ole Gunnar Solskjaer ‘wants’ the 25-year-old.

It’s claimed the 20-time English champions will try to convince the forward to give up Champions League football for a year in exchange for a higher salary and a key role in the team.

Maurizio Sarri wants the player to be sold this summer, according to the claims. Dybala is on holiday after the Copa America and is intrigued about the Turin club’s project under the former Chelsea manager.

On the other hand, the South American is said to be aware Manchester United are courting him and he’s not ignoring it.

United believe they can convince Dybala and the Old Lady for the transfer and are planning for a significant investment between €80-100m for the player, say Tuttosport.

Should the former Palermo man turn down the offer, only then Juve will be denied an opportunity to raise high figures.

If Dybala is sold to the English club, Juventus will try to urge super-agent Mino Raiola to push Paul Pogba out of United.

The transfer of Dybala, coupled with the sales of Moise Kean and Blaise Matuidi, will help the Serie A winners to raise the funds needed to sign Pogba. Tutto claims Matuidi could also be of interest to United. 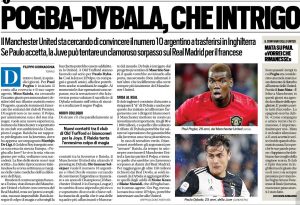 This all seems very convenient for Juve, and with Tuttosport being their local Turin newspaper, that’s the angle this is all being built from.