Having arrived on last summer’s deadline day at Lyon from Celtic, Moussa Dembele has so far impressed in his debut season, scoring 18 goals and registering four assists in all competitions.

The forward did not have a full pre-season with the Ligue 1 outfit, and has had some ups and downs, but has overall managed to impress this season.

Friday’s edition of L’Equipe claims the 22-year-old’s performances have drawn attention, particularly from England as Manchester United are keen.

It’s claimed that Ole Gunnar Solskjaer has taken early transfer steps as he is already working via intermediaries to study the profile of the Frenchman and the feedback received so far was appreciated by the Red Devils manager.

Solskjaer wanted to know about the player’s attitude, which is understandable given some of the players he currently has.

The report explains the striker, who still has four years left on his contract, is valued around €50m. 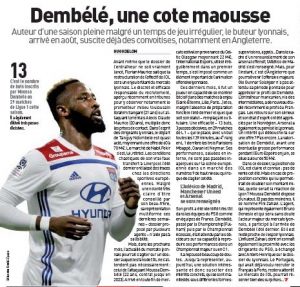 Dembele has been used as a centre-forward at Lyon this season and if Manchester United complete his transfer, he could be a replacement for Romelu Lukaku, if the Belgian leaves Old Trafford in the summer.