Even though it’s normally the Italian media who provides updates on the chase of Serie A clubs for Manchester United full-back Diogo Dalot, today we get to see some news from Portugal on the situation.

Newspaper O Jogo writes that following the 22-year-old’s loan spell at Milan, the Rossoneri are convinced to try another deal with the Red Devils to have him for more time.

It’s said the San Siro side already opened talks with Manchester United to sign Dalot on a new loan deal, with perhaps an option to buy included.

However, the Red Devils are still to take a decision on whether Dalot can leave the club this summer or not, since manager Ole Gunnar Solskjaer hasn’t given his final word. 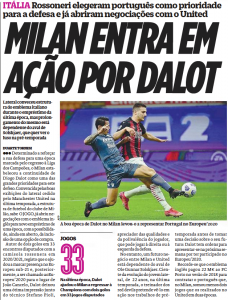 It’s said the coach wants to see Dalot working with the squad in the pre-season, and only then will decide if he’s staying or going.

Following his campaign with Portugal in the Euro, where he made his international debut, the full-back  is now set to join Manchester United’s squad next week.

Despite confirming negotiations, O Jogo doesn’t bring any information on how much the Red Devils would want in case Milan manage to get a buying option over the player.