For the first time in a while, the Portuguese media pushed the idea of Bruno Fernandes to Manchester United again on Thursday, saying the Premier League club had watched him in action against Porto at the weekend.

Ole Gunnar Solskjaer was presented as reevaluating the player ahead of a potential January swoop.

That information came from Record, and the Friday edition of the same newspaper has some more detail. Solskjaer, along with Mike Phelan, personally went to the match so they could check out the player themselves, according to the claims.

Record believe it means there’s a chance of an official proposal from Manchester United this month.

Over at O Jogo, they’re also going big on Bruno and a potential switch to Old Trafford.

It’s claimed United are in dialogue with Sporting over signing their captain, and they should quickly formalise their interest into an offer.

However, there’s a problem. The Lisbon club want €70m, and Manchester United don’t want to pay so much. The English club are ‘reluctant’ to meet the asking price set by 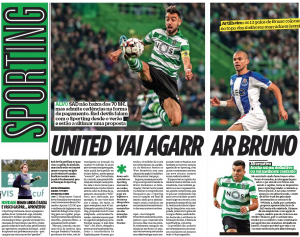 There may be some room for negotiation, especially having some of the fee as achievable bonuses, and the next few days could be crucial.