Ole Gunnar Solskjaer and Manchester United ‘haven’t given up’ on signing Bruno Fernandes this summer, reports A Bola on Saturday.

They cover interest from both the Manchester clubs, saying nothing has been decided yet and United certainly out of the race.

Manchester United’s manager is said to have ‘made it known’ he believes signing Bruno is ‘fundamental’ for his team next season, so it’s over to those in charge at the club to get a deal done.

A Bola say the Red Devils are capable of ‘presenting arguments’ which can both convince Sporting to sell them Bruno and also convince the player that a move to Old Trafford is the right decision. 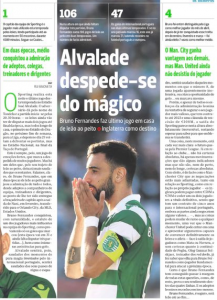 Meanwhile, O Jogo believe he’s closing in on a move to Manchester City, despite the club sending out denials this week.

Club ‘hope to complete’ transfer of Leeds United player – Has...

Club has ‘firm offer’ from Everton for Player – Toffees ‘willing...