By now, if you’re a Cardiff fan, you’ll probably know who Emiliano Sala is and why Neil Warnock is interested in him.

However, there’s the slight issue that the Argentinean striker isn’t all that thrilled about joining a Premier League team currently in a relegation battle, but a France Football journalist on Monday suggested money could really talk to him if it came down to it.

Nantes would be quite happy to sell, as €25m would be a massive amount of money for them, but, as things stand, there hasn’t been any progression in talks. 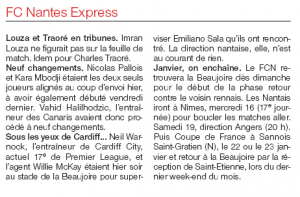 But, and it’s a big one, it seems Cardiff aren’t ready to give up as Ouest-France claim both Warnock and Willie McKay, a famous English agent, were spotted at Stade de la Beaujoire on Tuesday for Nantes 2-0 win over Montpellier.

After the game, the pair are said to have met with the 28-year-old, which the Ligue 1 side weren’t aware of at the time (they will be now, however).