Ander Gomes impressed during his loan spell at Everton and the midfielder’s performances for the Toffees had attracted interest from the Goodison Park club, Tottenham Hotspur (allegedly) and West Ham United.

Despite other interest, the Barcelona player’s intention was to join Marco Silva’s side on a permanent transfer in the summer transfer window.

On June 18th, we carried a report from Mundo Deportivo, who claimed the Merseyside club and the La Liga winners agreed a €25m fee for the sale of the former Valencia man.

A day later, Sport also explained the two clubs have found an agreement for the Portugal international’s transfer.

Two days ago, Marca reported the 25-year-old’s permanent transfer to Everton could be made official in the ‘next few hours’, but so far there has been no communication from either of the clubs on this subject.

Friday’s edition of Mundo Deportivo explains ‘small contractual nuances’ between Gomes and Everton have prevented the move being announced. 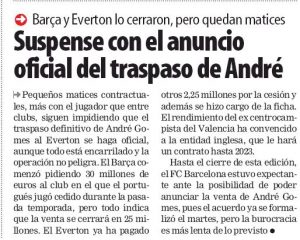 Mundo are of the belief the player’s contractual agreement for the next four seasons will be sorted out soon and the transfer operation is still ‘on track’.