For the media outside the UK, the Championship’s biggest clubs will certainly include Leeds United, Nottingham Forest and West Brom.

Leeds United are covered daily in the world media, largely because of the Marcelo Bielsa connections. The Elland Road boss is known throughout football, with the Spanish speaking media covering everything he says and does.

Nottingham Forest are known for their European Cup success and Brian Clough, and West Brom get a lot of coverage given they’ve been in the Premier League relatively recently and have a high profile manager in Slaven Bilic.

Bilic himself has been speaking to Croatian newspaper Vecernji List, and whilst much of the chat was about the country’s national team, the Baggies boss explained the size of the task to get promotion from the Championship, and named those clubs he considers biggest: “West Brom is one of the contenders, by club size and by name, with the league being specific in that it has a dozen clubs in a situation like that.

“You have three clubs that have dropped out, Cardiff, Huddersfield and Fulham, then Nottingham Forest, then West Brom, Middlesbrough, Leeds United, Stoke… there are a lot of big clubs in that league.”

More specifically to his own club, Bilic explained West Brom’s outlook since their relegation: “The club’s basic plan was to cut the budget by a few million because of huge pay differences between the first and second leagues, to rejuvenate the team and to make a new team in two years. It is not imperative to qualify 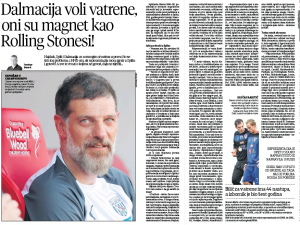 for the Premier League immediately, but it is our duty to create a competent team for the name of the club. The start is really good and everyone is happy. And when it goes so well, the plan changes. But this is the beginning.”

For now, the manager wants his side to remain ‘humble’, aware there’s big challenges to come between now and the end of the Championship season.