The biggest drama from the last week of the summer transfer window was when Manchester United beat Manchester City to Cristiano Ronaldo’s signature.

The forward wore the No.7 shirt in his first spell at Old Trafford and there were questions over whether or not he will be able to wear it again on his back, since Edinson Cavani had the number since the start of last season.

The Uruguayan, who came off the bench in the Red Devils’ win over Wolverhampton Wanderers, offered to vacate the shirt number, allowing Ronaldo to wear No.7 again.

This gesture hasn’t pleased Mundo Deportivo journalist Xavier Bosch, who also points out how United replaced the 34-year-old with the Portugal international around Old Trafford with a ‘Here we Belong’ written in bold. 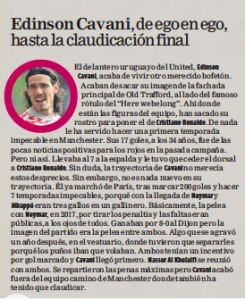 Bosch suggests it was ‘useless’ for the former Paris Saint-Germain star to have a ‘flawless season’ with United last campaign, that saw him score 17 goals and six assists in all competitions, which includes a goal in the Europa League final against Villarreal.

The journalist insinuates these incidents indicate Cavani has been insulted and has ‘experienced another slap in the face’. Bosch adds the South American’s career ‘did not deserve this scorn’.