On August 12th, Marca reported that Paris Saint-Germain were open to the idea of allowing Neymar join Real Madrid because they don’t want to sell the forward to Barcelona.

Sport claim Neymar arrived as a hero in 2017 and has now turned into a ‘villain’ in Paris. He wants to leave PSG in the next few days but the big question is if he will join Barca or Real Madrid.

However, Neymar’s desire to leave PSG in the coming days could favour the former over the latter.

That’s because Real Madrid have asked more time from PSG so that they can offload a few of their current players to raise funds.

Neymar, on the other hand, has urged Barca not to delay and play hard when negotiating with his employer.

Barcelona are willing to pay a fee plus two players to PSG. One of them is Philippe Coutinho, who will be offered on a season-long loan deal with a mandatory purchase option.

Barca believe today will be the key day and will intensify the meetings to close the deal for Neymar.

Mundo Deportivo on Tuesday claims the Brazilian’s situation in Paris is unsustainable.

Barca want the 27-year-old to publicly express his desire to return to the club, but Neymar hasn’t taken this step because it will then close Real Madrid’s door for him.

PSG, on the other hand, want to cash in from his sale and put an end to the ongoing saga.

Barca have never hidden their efforts in signing Neymar, but they are aware it’s going to be difficult. There have been contacts with PSG through Barcelona technical secretary Eric Abidal and Andre Cury. 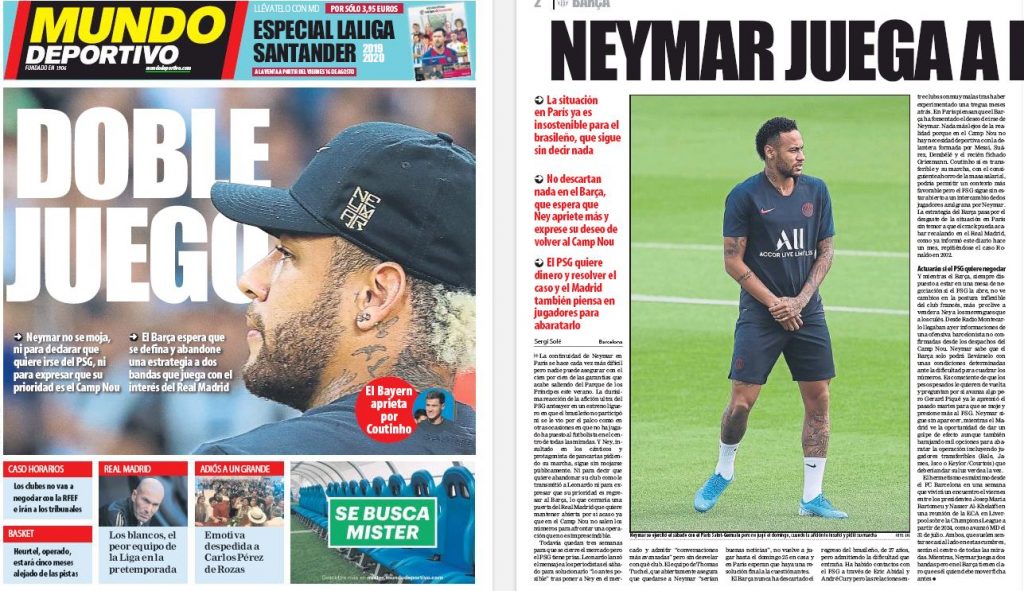 However, the relationship between two clubs has been poor ‘after having experienced a truce months ago.’ PSG are of the belief that Barca encouraged Neymar to push for a move away from the club this summer.

Barcelona are always willing to negotiate with PSG, but the same cannot be said for the French club with their Catalan counterparts, as they would prefer to sell Neymar to Real Madrid than to the Spanish champions.

Their idea is to reach an agreement ‘in the coming hours’, but there is no mention as to with which club they want to agree a deal.

Is this the light at the end of the tunnel?