Home Europe ‘Signs today for Spurs’ – Tottenham getting player for much less than...
SHARE

Gedson Fernandes is expected in London to have a Tottenham medical and sign for the Premier League club today, as was reported on Sunday in Portugal.

The coverage is widespread in the country, and there’s several details carried by newspapers which adds to the story, with several differing claims being made on the figures involved.

O Jogo reported on Sunday that Tottenham would be paying a €4.5m loan fee for the midfielder, who is arriving on an initial 18 month deal. They put the buying option at €50-60m.

It’s once again stated Jorge Mendes and Miguel Pinho have been working together on the transfer.

They don’t share a figure for the loan fee. 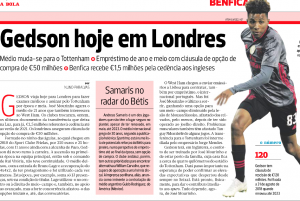 A Bola put the buying option at €50m, and they say the loan will cost €1.5m, which is a third of O Jogo’s claim on Sunday.

Near enough every Portuguese article reports Tottenham have beaten Premier League competition, and that the deal has been complicated due to several agents trying to barge their way in.

On another potential deal, none of the Portuguese reports on Bruno Fernandes mention Tottenham today.