Home Premier League Signing for Manchester United is player’s destiny and boost for whole of...
SHARE

Gareth Bale helped Real Madrid win the Champions League after defeating Liverpool in the final. Just moments after the final whistle in Kyiv, the forward expressed his frustration over his lack of playing time at the Spanish capital club and even admitted that he will talk to his agent to discuss his future.

Ever since Bale made those comments, the reports have emerged suggesting the Wales international will return to the Premier League. Manchester United and Chelsea are two English clubs linked with the former Tottenham Hotspur star.

Marca reports Jose Mourinho’s side are looking at the option of signing Bale this summer. The Red Devils have been linked with Real’s star attacker in the past, even before he moved to Spain in 2013.

The same report now claims that there is a growing belief at Old Trafford that Bale is looking for a new project as he feels he is no longer a key member of Real’s squad. Marca claims United will have the support of the entire Premier League in their efforts in signing the ex-Spurs player.

They believe that everyone would be grateful to Mourinho and co for pulling off such a deal, and it would help justify the Premier League’s claims to being the most entertaining league. We know what you’re getting at, Marca. 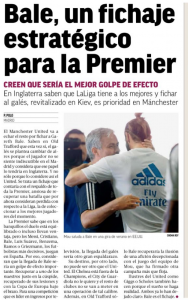 The Spanish newspaper also claims that signing for United is Bale’s ‘destiny’, as it’s felt repeatedly since he was at Southampton and dubbed the new Ryan Giggs. This is because a move to Chelsea could be ruled out as they are not in the Champions League, while Manchester City are not interested in signing him. In addition to this, other clubs cannot sign because they cannot afford his wages.