Barcelona are looking to strengthen their attack for next season and are running their eye over various players who they consider could fit well into their system.

Thursday’s edition of Catalan newspaper Mundo Deportivo says one of the targets for the La Liga winners is Marcus Rashford of Manchester United.

The headline of the short story reads ‘Rashford, the impossible dream’ as even the Blaugrana are aware it will not be an easy task to take the forward away from the Red Devils.

It is explained the sporting leaders of the club ‘like’ the England international ‘a lot’.

Barcelona know it will be a complicated, and therefore very unlikely, signing because the player has no release clause in his contract. 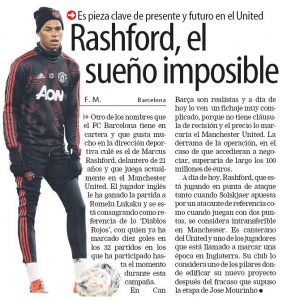 The report claims the Old Trafford chiefs consider the England international ‘non-transferable’ and see Rashford as one of the pillars of the new project they are building following Jose Mourinho’s exit.

Meanwhile, reports in England suggest that Rashford is set to commit his future to Manchester United by signing a long-term contract.