Home Europe Signing ‘continues to be a dream’ for Tottenham – Paratici will have...
SHARE

Fiorentina star Dusan Vlahovic remains a ‘dream’ signing for Tottenham this summer, but they will have some convincing to do if he is to make the move.

That’s according to Corriere Dello Sport, who say the striker is currently focused on renewing his deal with the Italian side.

Vlahovic has emerged as one of the hottest youngsters in Europe over the last year or so, with several top sides thought to be keeping an eye on him.

Tottenham have regularly been named as suitors, particularly since Fabio Paratici arrived as their new director of football.

Last month it was reported he could go to battle with Juventus for the youngster, with it later stated that he would be the Italian’s first target at his new club.

Indeed it was stated that Tottenham were the ‘closest’ to signing him and among the ‘most serious candidates’ for his signature. Even his huge price tag wasn’t thought to be a problem.

Corriere don’t really back that up today, but they do say Vlahovic ‘continues to be a dream’ signing for ‘many top clubs’ but only name Tottenham specifically. 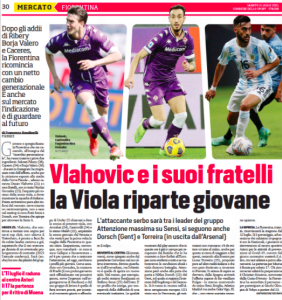 The big issue is the player himself, who is waiting for his entourage to discuss a possible new deal as his current contract expires in 2023.

Similarly, Fiorentina are keen to keep him, and he is set to be one of the of the new squad they are assembling that will be based on players under 25.

That would suggest Tottenham, and Paratici in particular, have work on their hands if they wish to make this dream signing a reality.