There’s been a lot of talk over the past few days about AS Roma’s desire to sign Tammy Abraham, which has been met with some resistance from the Chelsea player.

It’s not that he doesn’t think AS Roma are a good club, but the main issue is he doesn’t particularly want to leave London, and with Arsenal also keen, he has an option far closer to home that would see him remain in the nation’s capital.

That being said, AS Roma aren’t ready to give up, as shown by their general director’s trip to London, where Tiago Pinto met with the player’s agent and Chelsea’s intermediary on the deal, Federico Pastorello.

Gazzetta dello Sport give us their latest information on the matter on Friday, recapping what took place during the meetings on Thursday.

In essence, with Abraham somewhat skeptical about a move abroad, the player decided to ‘up the ante and shoot high on his salary’, asking for ‘almost €5m/year’, which is pretty much double what he earns at Chelsea.

Gazzetta describe it as his way of saying ‘if you really want me as you say, prove it to me to the end’.

That’s what Pinto tried to do in the meeting on Thursday, ‘hoping to be able to bring the player home’, since this has gone beyond a mere series of early probes, and ‘it has also become a question of image’, because ‘returning to Rome without Abraham would be a bad blow to absorb’. 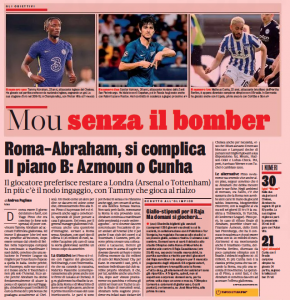 A new meeting is expected today after two yesterday in order to ‘try to get the fateful white smoke’, but ‘it will not be easy, despite the fact Roma are trying everything’.

While Pinto isn’t putting all of his eggs in one basket, he has most of them in there, because ‘he is convinced that it is on Abraham that he should put all his chips’.

However, ‘Pinto’s hope, on balance, is that Abraham is really convinced to accept the Giallorossi offer’.