Home Premier League Arsenal Signing for Arsenal is now ‘the only possibility’ for player in January,...
SHARE

Denis Suarez to Arsenal has been talked up into something of a crescendo by the Spanish and English media over the past week.

It’s a story pushed by Barcelona’s local media for well over a month and started with the idea of Suarez wanting a January transfer. At first it had been pretty certain he’d wait until the end of the current season and then assess his options, but with time on the pitch increasingly harder to find the situation changed.

Arsenal and Chelsea were originally linked and it became clear, at least as far as the Catalan media were presenting it, that Suarez was targeting Arsenal because he felt he’d suit their style of play.

Having worked with Unai Emery previously was also a factor.

In mid November, we covered claims from Spain that Suarez had picked out Arsenal as a ‘favourite option’.

Things continued from there and Sunday’s edition of Sport stated Arsenal is ‘the only possibility’ for the player in January, otherwise he’ll wait until the summer. He’s said to have ruled out Chelsea and Milan options.

Arsenal and Barcelona are described as being in negotiations, but the Gunners ‘cannot invest’ in a straightforward transfer in January so would only agree to a loan. Further talks are 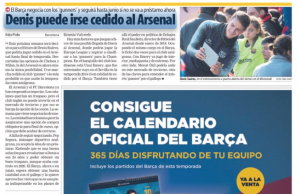 expected over the next week when Sport say Barca will try to agree a compulsory purchase option.

Staying at the Camp Nou for the rest of the season is presented as a real option.

This sounds like the deal being pushed towards Arsenal for consideration, rather than an operation initiated by the Premier League club.