Manchester City are expected to be busy in the transfer market after failing to provide a serious challenge to Liverpool in the league.

Over the past few days, Valencia’s Ferran Torres has been heavily linked with a move to the Etihad.

Two days ago, local newspaper Super Deporte explained ‘all or most’ roads lead to City for Torres.

They also added the 20-year-old’s name is ‘doubly underlined’ by the Citizens for this summer.

Saturday’s edition of AS states the Spain U21 international’s transfer lies in the hands of Peter Lim, the La Liga club’s owner.

The player, who has one year left on his contract, has decided to leave this summer and Lim is personally handling his case, knowing that Pep Guardiola’s side are the most interested in the player. 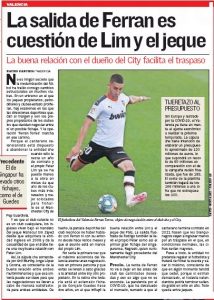 Mansour, and the newspaper adds this could ‘facilitate’ Torres’ transfer to Manchester.

AS also stress the wideman’s sale will not bring in the money ‘desired’ by the club, mainly because of the transfer market impacted by the Covid-19 crisis and the duration left on Torres’ contract. The report, however, doesn’t mention any figures.