After reports from newspaper O Jogo, it’s now Record who claims the Owls have shown they’re keen on signing the 26-year-old.

João Amaral has just signed for Benfica, arriving from Vitória de Setúbal. Sheffield Wednesday’s interest is planned on the scenario the Eagles don’t plan to use him this season, allowing a loan move.

What Record also makes clear today is that the Championship side are not alone in the race, as there are other clubs keeping an eye on the player’s situation. 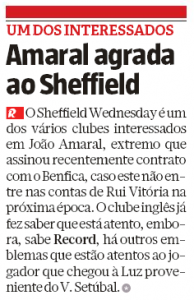 João Amaral mostly plays as an advanced midfielder, but can also do a job on the right wing. He finished the last season for Vitória with nine goals and four assists in 40 appearances.

Now it seems that for Sheffield Wednesday to get him, Benfica need to decide what they will do with the player first.