Carlos Carvalhal may be gone from Sheffield Wednesday, but it seems there’s still some of his legacy when it comes to the club’s plans to recruit new players.

The Owls were one of the few Championship clubs who constantly scouted Portuguese league games when Carvalhal was in charge, which made a lot of sense, but now they continue doing this job despite his departure.

On Saturday, Wednesday scouts had already been spotted watching Benfica’s 5-1 win over Rio Ave in Lisbon. And on Sunday, according to O Jogo, officials also watched Estoril’s 2-0 win over Sporting.

As Sporting are fighting seriously for the title, the result came out as a big surprise, and there weren’t many positive to takes from the Lisbon side. 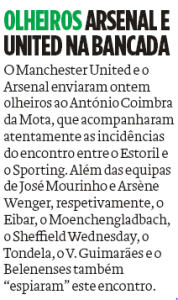 Estoril however, had three key players helping them get the result, all of them Brazilians. Goalkeeper Renan Ribeiro, midfielder Ewandro, and the man of the match, Lucas Evangelista.

As O Jogo don’t point out if Sheffield Wednesday were watching a specific player, it’s hard to guess a possible transfer target. But these are three guys who certainly deserved some attention from the scouts.

Arsenal, Manchester United, Eibar and Borussia Monchengladbach were the other foreign clubs who sent scouts to this match.