Currently spending his vacations in Portugal, it seems that Sheffield Wednesday striker Lucas João has been pretty busy with the local media.

On Friday, the player had an interview featured in newspaper O Jogo. And today, it’s Record who brings a chat with him.

Both interviews were mostly about Bruno Lage, who used to be an assistant coach at Sheffield Wednesday and is now boss at Benfica, where he’s had a great campaign this season.

But Lucas João also had time to speak a little about the Owls, especially the reasons why they couldn’t get promotion to the Premier League, despite a good start in the Championship.

“The most important games were those that we struggled with. That’s when we died on the beach,” Lucas João told Record.

“Individually, the start was good. I had been scoring some important goals. It was going well. At the collective level it wasn’t the expected way because our goal was promotion the Premier League, but we have to keep looking for it in the coming seasons.” 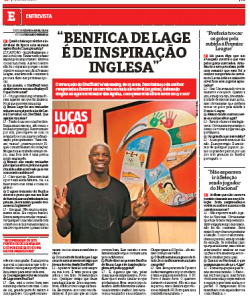 Lucas João scored 10 goals in the Championship this season, averaging a goal every 161 minutes. But he claims that it doesn’t really matter if Sheffield Wednesday couldn’t get the promotion.

“A striker lives from numbers and goals. Regarding this, this season yes, I had the happiness of scoring more goals, but obviously I would rather change the goals for promotion to the Premier League.”

Speaking of the future, João claims that he wouldn’t return to his home country so soon: “For now the future is in England. Obviously I have the desire to play again in the Portuguese League.”

But he also says it would be hard to reject a bid from Benfica, Porto or Sporting: “To a big one you never say no. It’s prestige. It’s a desire of any player, to step on the big stages for one of the three greats of Portuguese football.”