Ever since Carlos Carvalhal was in charge at Sheffield Wednesday, the Championship club have been sending officials to Portugal to do transfer window-shopping.

The club regularly have scouts at matches in the country, and they’re continuing to do so ahead of future transfer windows.

O Jogo reports Sheffield Wednesday had someone in attendance on Saturday evening as Benfica beat Vitoria Setubal 1-0 in Lisbon. They weren’t the only club there, Lyon had an official present, likely scouting ahead of their Champions League fixtures against Benfica.

Tondela were there, potentially scouting both clubs with regards to future domestic fixtures, and Manchester United were the other club on the list.

It’s no surprise the Premier League club were in attendance, they watch nearly every Benfica match whether home or away. 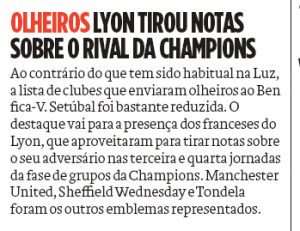 O Jogo points out the number of scouts was ‘greatly reduced’ compared to usual numbers, and they don’t have a theory why.

There’s no suggestion of who Sheffield Wednesday were watching.