This morning, Sheffield Wednesday announced two pre-season friendlies. The Owls will be facing Mansfield Town and Doncaster Rovers, both in July, as part of their preparation for the new Championship season.

But the Portuguese press seem to have further information on Carlos Carvalhal’s summer games, as two newspapers are confirming he will take the team to his home land once again.

A Bola and O Jogo both confirm that Wednesday will face Portimonense on July 19th. The game will mark the debut of Estádio Municipal de Portimão’s new pitch. 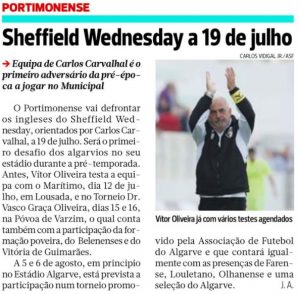 Portimonense have already announced their full pre-season schedule, and as Sheffield Wednesday are the only opponent from outside of Portugal, Carvalhal’s side are the club getting most attention from the local press.

The Owls faced two Portuguese clubs in their pre-season last year. They first played Benfica in England, winning 1-0, and then went to Portugal where they faced Nacional, also winning, this time with a 4-0 scoreline.