Sheffield United failed in their efforts to sign Genk’s Sander Berge before the start of this season as he wasn’t keen on joining the newly promoted Premier League club.

The Blades are still chasing the midfielder, and as HLN reported on Monday the Jupiler Pro League club turned down Sheffield’s first offer of €20m for their star.

Het Belang van Limburg now claims the interest from Chris Wilder’s side in the Norway international is ‘concrete’ and Genk would be willing to grant the 21-year-old’s move to Bramall Lane, provided they can retain his services until the end of the season.

So far, no decision has been taken on Berge as the English side continue to court him.

Another Belgian newspaper, Het Nieuwsblad, also has an update on Berge and they also state interest from Sheffield in the player is concrete.

It’s claimed there’s a good chance he could leave Genk this week, if the English side increase their bid of €20m plus also agree a percentage of the fee on future sale. 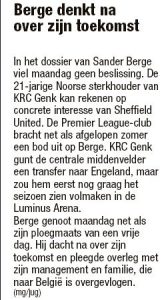 Genk, on the other hand, want to keep him until summer and should this happen, Sheffield United will ask to lower the transfer fee.

Berge’s family have travelled to Belgium and he is currently consulting with them about a potential move to Sheffield United.