It’s been nearly a couple of years since we last saw Sheffield United having a scouting mission in Portugal, and now we’re back on finding a story about it.

With the Blades not even being linked to players from the Portuguese league lately, there’s of course no clue as to who from the local talents they may be keeping an eye on.

Now, with a lot to be seen in Porto’s 1-0 win, we can probably guess a few names who may have drawn some attention from the emissaries at the match.

With a beautiful goal from Nuno Santos, Paços Ferreira opened the score and had a fair display at the Estádio do Dragão, with goalkeeper André Ferreira holding their result as much as he could. 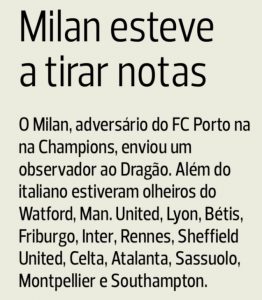 Then Porto had two main creative players who dictated their comeback.

First Vitinha, who dominated their offensive sector, and also left-back Wendell, who besides a good performance on his position, also scored a goal.

Meanwhile, striker Luis Diaz, who’s been in evidence since the Copa America, scored for the sixth time this season.

With Sheffield United starting their scouting job early in the season, we should now probably wait and see how long it takes for them to get properly linked to players from the Portuguese League.