Tuesday was rather fun as far as Sander Berge rumours went.

First, there were again multiple claims from Belgium about a possible move to Sheffield United this month. The Blades have been keen since the summer, and in the past few days there’s been talk of a €20m offer being made.

That offer was rejected, with Genk preferring to keep the midfielder until the summer, even if they agree a deal now, so although talks continued on Tuesday, there was no agreement.

Then, all of a sudden, media close to Manchester United reported Berge had showed up at the club’s Carrington training centre. There was even a photograph of someone who looked vaguely like the footballer.

Wednesday’s edition of HLN report Genk are still negotiating with Sheffield United, with the Yorkshire club ‘planning a new and improved bid’.

Genk’s sporting director Dimitri de Conde is quoted as saying: “Some things are moving around our players, especially around Berge.” 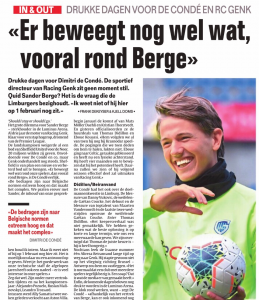 De Conde admitted he doesn’t know if the player will still be at Genk on February 1st, and it very much sounds like the Belgian club are now getting used to the idea of him leaving in this window.

Sheffield United’s next offer just has to be good enough.

Watford duo eyed up for moves – Club demanding €15m for one, considered a ‘very interesting operation’

Watford duo eyed up for moves – Club demanding €15m for...

West Ham to face frustration in hunt for fullback – Club...