One of the transfer rumours you may remember us covering during the summer transfer window was Younousse Sankharé and Sheffield United.

L’Equipe claimed that the Blades were looking at the Bordeaux midfielder, with the 29-year-old a player that was ‘much appreciated’ by Chris Wilder and his team.

If the interest was genuine, though, the Blades might want to keep an eye on the midfielder.

L’Equipe report on him today and his situation with the Ligue 1 club is not a very good one.

According to the newspaper, ‘it is not impossible’ that Sankharé has played his last game for the club, who are not very impressed with him.

They’ve been pushing him towards an exit for some time, with them criticising his professionalism after he missed training. 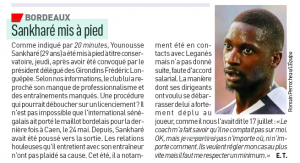 Sankharé is also said to have a ‘heated’ relationship with Bordeaux manager Paulo Sousa, adding more fuel to the club’s desire to move him on.

The situation is not right, and it’s one Sheffield United could take advantage of come the January transfer window.

Sankharé is unlikely to turn down the chance of a Premier League move, and Bordeaux clearly want rid, so there’s willingness all round to get a deal done.

Wilder would be wary of the reports about the midfielder’s attitude, but he signed Ravel Morrisson this summer, showing he’s not scared to take on a bad attitude if he thinks the player is good enough.