It had carried on from Monday, when HLN, another Belgian newspaper, reported the Genk midfielder is now open to signing for the Yorkshire club.

The Blades had made attempts in the summer, and then Berge wasn’t so keen, perhaps assuming Sheffield United would be in a relegation battle. Given how well the team have done this season his stance has changed, so now it’s just down to finding an agreement with his club.

Sheffield United were said to have offered €20m, an amount rejected by Genk, and it was made clear Berge’s club would prefer to keep their player until the end of the season, even if a transfer is agreed now. 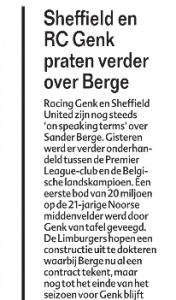 Despite it not sounding like there’s been a breakthrough, the clubs ‘continue to talk’ and the possibility remains of a deal.

HLN state the €20m was ‘swept off the table’ by Genk, which suggests they want a decent chunk more. It’s again stated they’d want the player until the end of the season, but it’s unknown what Berge and Sheffield United think of this.