While competing on the pitch is the main priority for the big clubs, there’s also a constant battle for marketing dominance off it as well.

Simply claiming you are special is no longer a trick that works. Special means something different to everyone, and there’s more than one club out there claiming that it applies to them.

That is something Liverpool CEO Peter Moore is acutely aware of. Marketing a club as big as Liverpool required something different, they could not simply say they were special and hope to get away with it.

Instead, he tapped into the past, focusing on Liverpool’s most famous manager, Bill Shankly, to unravel what it meant to be Liverpool.

“As an expert in marketing, I wanted to unravel what it meant exact,” he Spanish newspaper El País.

“To say that Liverpool is unique does not mean too much. Real Madrid and Barcelona, Dortmund and Bayern, are also special.

“So, how do we show it? We had this incredible historical figure: Bill Shankly, a socialist from Scotland, who built the foundation of the club.

“Even today, when we talk about business, we ask ourselves: ‘What would Shankly do? What would Bill do in this situation?’

“He was a true socialist who believed that football was to work together. In the marketing department, we met, and we said: ‘we’re going to put this in words’. The conclusion was that the essential idea of Liverpool is that this means more.”

Shankly is, of course, the man that built the foundations upon which Liverpool Football Club stand today.

When he arrived in 1959, Liverpool had been a second division club for five years while Anfield was in disrepair and their training ground a ‘shambles’ according to the Scot.

He set about reinventing the club as a whole, not only insisting on a complete overhaul of the playing squad and aspects such as the stadium and training ground but creating a culture of success.

That was something he achieved as, by the time he retired in 1974, Liverpool had won three Division One titles, two FA Cups, a UEFA Cup and three Charity Shields under his leadership.

And when asked about that sense of culture, Moore says Shankly defined it as socialism (not the political stance), and it is this ‘brand’ that marks Liverpool out from the rest.

“He (Shankly) defined it as socialism. But not in a political sense, but in the sense of solidarity.

“There is a banner in The Kopp that says: ‘Unity is strength’. Liverpool is a socialist city, tradition, a working-class city, close to the port. It was once the port with the most traffic on the planet.

“That has changed, but there remains the sense of the unity and insularity, to a certain extent. Many people are seen as Scouse, not necessarily English.

“There is a song that fans 60 years ago created that described this style as ‘poetry in motion’. It is not exactly the tiki-taka, but occurs when the game flows freely with fast counterattacks. It is our brand.”

Given the deep socialist roots that permeate through Liverpool, it was almost inevitable that they should have ended up with Jürgen Klopp as their manager.

The German is a staunch socialist in the political sense, something he’s made clear on more than one occasion and has proved a perfect fit for the Reds. 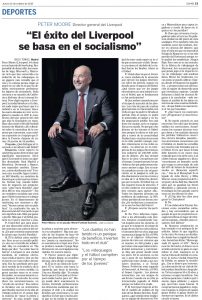 Moore is certainly of that mindset, saying he’s already a Liverpool legend as far as he’s concerned.

“He is already a Liverpool legend. He leans more to the left than to the right,” he added.

“He perfectly understands the socialist elements that permeate the club and the city, the challenges that excite the fans, and what the club means for many people who have not had the opportunity.”