Just under two weeks ago, we relayed a claim from Gazzetta dello Sport that both Manchester City and Manchester United were interested in Fiorentina’s Federico Chiesa.

The two sides were said to be ‘courting’ the young winger, and while a transfer to either club made sense, there was nothing too concrete about it yet.

Fast forward to the weekend, and the player himself might have just hinted where he’d like to end up, if he had a choice between both Manchester clubs, in an interview with Corriere dello Sport.

Asked about who he wanted to be like in football, he said: “I like [Leroy] Sané a lot. He plays at Manchester City with other great champions of De Bruyne’s calibre. They play beautiful football and I like how he plays his role. 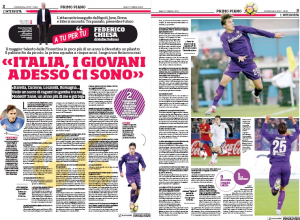 “I say Sané because he’s only a year older than me and to see a player of his age play so well in a team trying to win the Champions League and the league is beautiful”.

To us, that sounds like a ringing endorsement for both the Germany international and the club he plays in.

Oh, and Pep Guardiola, the man who puts everything together.

After all, having missed out on Riyad Mahrez during the January window, going for someone with similar attributes, but a bit younger, in the summer could be something the Spaniard has in mind.

If he is indeed ‘courting’ Chiesa, then his job is done, because the 20-year-old already sounds sold on the idea of moving there to play with Sané.