Home Premier League Chelsea Club only prepared to pay ‘up to €15m’ for Chelsea defender, and...
SHARE

On Tuesday, we took some time to clarify one of the stories that was circulating around regarding David Luiz and a potential transfer to Napoli.

The English media had picked up on a poorly put together piece based on an Il Mattino article stating the Serie A side were ‘putting aside £26m’ for the Chelsea defender.

That wasn’t the case, as the £26m was how much Udinese wanted for Alex Meret, and the Italian newspaper hadn’t reported on how much Napoli were prepared to pay for Luiz.

One of the misleading articles appeared in The Sun, which Il Mattino have picked up on, although they believe the English newspaper’s article confirms their previous claim rather than just relay it (it doesn’t). 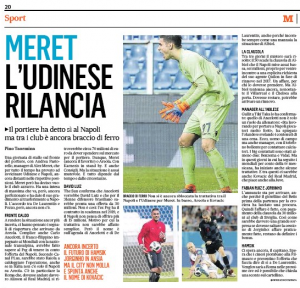 Either way, they’ve also picked up on the €30m line, and they clarify the situation.

As we expected, Il Mattino report Napoli have no interest in spending that much on the Chelsea defender, who only has one year left on his contract.

They believe the Serie A side will only offer up to €15m should they come forward with an offer, and they know that trying to get the Brazilian for that price could prove difficult.

At least now we know where Napoli stand, and it’s not at £26m.